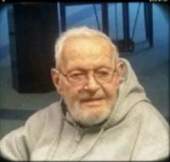 Robert Wallace Williamson died on Thursday September 24, at his home in Webster City, Boman Funeral Home (www.bomanfh.com) is in charge of arrangements. A memorial Service will be Monday October 19 at 10AM, at the Faith United Methodist Church in Webster City.


He was born in Eldora, Iowa on February 17, 1925 to Gerald and Emma (Lettow) Williamson.  Bob was raised by his grandparents on their farm in Eldora.  He attended school in Eldora where he first met Shirley Whitney, in the first grade.   Shirley’s family eventually moved to Minneapolis but they kept in touch, and Shirley faithfully wrote to Bob during the war.


When Bob was 17, and just a junior in high school he joined the navy, where he was a 2nd Class Radarman.  He spent time in Iceland, England, Casablanca and the South Pacific, and was involved in 13 major battles.  He trusted in Jesus Christ as his savior while in the Navy, and Shirley received Jesus as her savior at the same time in Minneapolis, and their letters telling each other crossed in the mail.  After he was discharged he returned to Eldora and finished high school and then married Shirley in Minneapolis on June 30, 1946.  After their marriage they lived in Minneapolis for a few years, and then moved to Waterloo, Iowa. After retirement the couple went to live in Montana where their son Tim and his family lived, and then eventually came back to Iowa to be near their daughter Becky.


Bob’s family includes:  his wife Shirley; son Tim and his wife Sue; daughter Becky and her husband Paul Koppen; 9 grandchildren; and 4 great grandchildren. He was preceded in death by his parents, and two sisters Patricia and Virginia.
To send flowers to the family in memory of Robert Wallace Williamson, please visit our flower store.