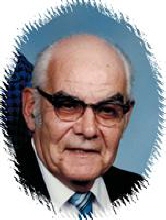 Roy D. Evans, 89 years old, passed away Sunday, May 20, 2012 at his home in Webster City, IA.  A visitation will be held on Thursday May 24th from 5-8 PM at Trinity Lutheran Church in Webster City.  A funeral service will be held on Friday, May 25th at 11:00 AM at the church. Burial with Military honors will be in Blairsburg Cemetery.  Boman Funeral Home is caring for the family. Bomanfh.com
Roy was born on April 8, 1923 to Alva & Grace Burkhead Evans in Woolstock, IA.  He was educated in the Webster City School system.  He married Helen M. Peterson on June 23, 1946 in San Francisco, CA.  They were married for 65 years and were blessed with eight children, including: Kathy Cory (deceased); Rita Oswald (Rev. Mark). Conklin, MI; Keith Evans, Webster City; Deb Fisher (Bob), Waterloo; DeAnn (Dave Atchison), Fort Dodge; Liz Evans, Webster City; Cheryl Evans-Pryor, Des Moines; Norma Evans & Dan Hoover, Coalville.  In addition, he has 14 grandchildren, 14 great-grandchildren & is survived by many cousins & nephews.  Roy was preceded in death by his parents, daughter Kathy, infant brother James, brothers Everett, Robert, Kenneth and sisters Margaret Loder, Marie Sealine & Violet Evans.
He started working at a young age and was employed at various places over the years including: Fort Dodge, Des Moines Southern Railroad, Selby’s Produce, a turkey farm, McCollough Foundry, Morton’s Food Pies and he worked on farms near Webster City month by month.  He served in the United States Navy during WWII on the USS Corbesier.  Roy was a cook as a 2nd class Petty Officer and during general quarters he manned the five inch guns.
Following discharge from the Navy, he worked as a cook at Hammers Café and Little Chicago Café in Webster City.  He was also involved in carpentry work for a large part of his life, and was a handyman who helped many people with various projects.  He took great pride in all of his work.  He was also an avid outdoorsman, hunting and fishing all of his life.  Spending family time together was the most important thing to him.  Memorials will be at the discretion of the family. He will be greatly missed.
To send flowers to the family in memory of Roy Dean Evans, please visit our flower store.