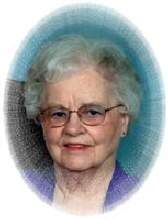 Ruth was born to Louis & Bertha (Olthoff) Brinkema on May 21, 1919 on a farm East of Kamrar.  She attended rural elementary school and in 1936 graduated from Kamrar High School.  She received her Teacher’s Normal Training Certificate from Iowa State Teachers College in Cedar Falls.  She taught in several Hamilton County rural schools for five years.

On June 22, 1947, she married Boyd Berven.  They start married life for a year and a half in Webster City, before moving in 1949 to farm near Stanhope.  Boyd retired from farming in 1984.  Ruth enjoyed her original farm neighborhood circle of friends.  She enjoyed the birthday club that included those friends.

Ruth was a member of Trinity Lutheran Church & Lydia Circle.  She was a long-time volunteer at Crestview Care Center & a gift shop volunteer at Hamilton Hospital.

She was preceded in death by her parents, sister (Marguerite Klaver), son-in-law (Richard Bateman) & brother-in-law Arvid Luppes.
To send flowers to the family in memory of Ruth Elizabeth Berven, please visit our flower store.