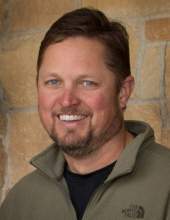 Scott Jaycox, 49, of Webster City died unexpectedly on Saturday, July 18, 2020 in Mason City, Iowa. Visitation will be on Thursday, July 23 from 5:00 – 7:00 PM at Boman Funeral Home in Webster City (www.bomanfh.com). A memorial service will be held on Friday, July 24, at the Lynx high school football field at 11:00 AM. If inclement weather should arise, service will be held at Trinity Lutheran Church.

Scott was born on July 26, 1970 to Lynn and Debbie (Draeger) Jaycox, in Webster City, Iowa. He was a 1988 graduate of Webster City High School. He attended Hawkeye Tech. where during the photography program he met Juli Kuebler. They were married in Bettendorf, Iowa on October 10, 1992. The couple lived in Bettendorf for five years, during that time Scott worked at the Camera Corner then VanPelt Drywall. About the time their son Cooper was born, Scott’s Uncle Rodney, Lynn and Scott decided to carry on the father son portion of the Jaycox Construction business. The three moved to rural Duncombe and soon after the three became four when daughter Maia was born.

Scott was a true outdoorsman, to him hunting and fishing were one word. He enjoyed trips to Canada to fish with his friends, but his most cherished times were spent at his Grandpa Draeger’s farm teaching his son and daughter the value of a good tree stand. Saturday mornings weren’t spent watching cartoons, they were spent watching ‘whispering’ shows, aka The Outdoor Channel.

He was a great contractor and husband, but his first and most loved job was being a dad. Whether it was the 100-degree soccer tournaments or the backstage dance prop handling he was there. He was their toughest coach and biggest fan.

Scott enjoyed hosting Wednesday night ‘Golf League’, being a bourbon connoisseur, as well as being a member of Rotary After Hours, National Wild Turkey Federation and Pheasants Forever. He was also a member of Trinity Lutheran Church.

The family prefers no plants or flowers. Memorials can be made to Webster City Rotary Club, Hamilton County Pheasants Forever or The Bee and Butterfly Habitat Fund
To send flowers to the family in memory of Scott Jaycox, please visit our flower store.