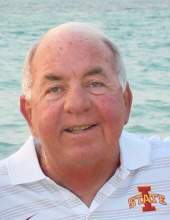 Terry Eugene Wells was born on February 22, 1946, to Clarence and Mildred (LaMee) Wells, in Webster City, IA. He attended the Webster City Schools, graduating in 1964. He served in the Air Force during the Vietnam War, and was able to go on the Brushy Creek Honor Flight in May of 2016. Terry was married to Donna Egger in 1974 at the Asbury United Methodist Church in Webster City.

After his honorable discharge from the service, he worked for the City of Webster City Line Department for 10 years, then as a heavy equipment operator for the Hamilton County Secondary Roads Department until his retirement in 2007. To keep himself busy for his retirement and support his vacation habit, he mowed lawns.

Terry was a pitcher for the Webster City Merchants fast pitch softball team along with additional teams. He was an avid Iowa State fan and was a season ticket holder for Iowa State Football for 47 years. He was also a member of the American Legion and the Moose Lodge. Terry enjoyed watching his grandsons race every weekend in the summer in Webster City and Fort Dodge.