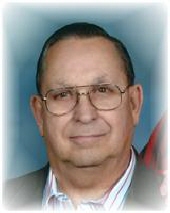 Thyrol R (Buggy) (Mac) McCollough, 87, of Webster City, IA, died Wednesday, July 29, 2015 in Des Moines, IA.  A visitation will be held Monday from 5-7 at Trinity Lutheran Church in Webster City.  His funeral will be Tuesday 11 at the church with Rev. Dr. Michael Kroona officiating. www.bomanfh.com
Mac was born to Ralph & Marie (Pinkele) McCollough on January 14, 1928 in Webster City, IA. He served in the Army for a year and a half as a PFC until his honorable discharge in 1947 He worked at Selby’s Poultry.


Alene LaVonne Naber and he were married on January 15, 1949 in Webster City.  Mac worked for a short time at Beams. For most of his working life he was the shop foreman for Sandvig Garage then Christianson Garage.  Peterson Construction was his last place of employment, retiring at the age of 55 due to an injury.  Buggy spent a few years driving at Modern Farms.


Mac was a member of Trinity Lutheran Church, The Moose Lodge and the American Legion post 191 all of Webster City.  He could be seen solving the world’s problems at HyVee with the morning coffee group.  He enjoyed old western movies and country western music.