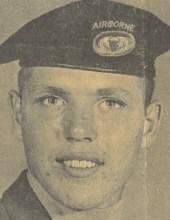 He was born on May 10, 1949, in Webster City, to Harold and Clara (Thompson) Biggs. After graduating from the Webster City High School in 1967, Tommy entered the Army and served three tours of duty in Vietnam, 25 months in active combat. During his service he earned four Purple Hearts, one Silver Star, one Bronze Star, Combat Air Assault Medal, and the Gallantry Cross.

To send flowers to the family in memory of Tommy Biggs, please visit our flower store.