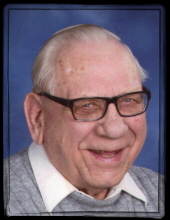 Verner was born on October 18, 1929, in Buckeye Township, Hardin County, Iowa the son of Ivan and Minnie (Ratzke) Raska. He attended Racine School until fifth grade, then attended Buckeye School until eighth grade, and then the Alden High School, graduating in 1947.

He worked for the Town of Buckeye and for Harry Bahr as a farm laborer until graduating from high school. He moved to Webster City in 1948 where he worked for Hughes Market, Forrester’s Creamery, and Wood’s Implements Inc. In 1959 he started his own upholstery shop which he would operate for over fifty years.

Verner served in the U.S. Army from 1951 to 1953 spending 18 months in Korea. He married Mabelle Clabaugh on February 4, 1951, in the Methodist Church in Williams, Iowa. Verner was a member of the American Legion Post 191, Webster City Chamber of Commerce, and St. Paul’s Lutheran Church.

Verner’s family includes his wife; and many nieces and nephews. He was preceded in death by his parents, three brothers and one sister.
To send flowers to the family in memory of Verner Raska, please visit our flower store.