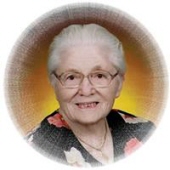 Virginia Orlo Anderson, 91, of Webster City, IA, died Tuesday January 10, 2012 at Van Diest Medical Center in Webster City.
A funeral service will be Friday, January 13 at 2:00 PM at Asbury United Methodist Church in Webster City.  Visitation will be Thursday with the family present at the church from 5-7 pm and one hour prior to the funeral, Friday.  Burial will be in Riverside Cemetery in Spencer, IA.  Boman Funeral Home is entrusted with the arrangements.
Virginia was born to Orlo & Edna (Lockey) Goodell in Gowrie, IA on March 30, 1920.  She married Willard Anderson on February 9, 1941 at the United Methodist Church in Kamrar, IA.  They settled on a farm East of Duncombe to start raising their family, eventually moving to the Anderson family farm north of Webster City.  Upon retirement they moved to Spirit Lake, IA where they summered at Lake Okoboji and wintered in Zapata, TX.
She earned her Bachelors and Masters Degrees in Special Education from Drake University.  She taught in schools in Webster, Wright and Hamilton counties as a teacher and as a Special Education Consultant.  She was a member of Asbury United Methodist Church.
Her family includes: three sons & their wives Kenn (Barb) of Spirit Lake, IA, Brian (Susan) of Gallatin Gateway, MT & Don (Trudy) of Webster City; brother & his wife Bob (Clysta) Echelberger of  Kamrar, IA; three grandchildren Sarah Berkheimer, Chris Anderson & Brad Anderson; two great grandchildren Parker & Cannon Berkheimer and several nieces & nephews.  Virginia was preceded by her husband Willard in 1997, parents, three sisters, two brothers and one infant brother. Memorials in her memory may be given to a charity of choice.
To send flowers to the family in memory of Virginia Orlo Anderson, please visit our flower store.