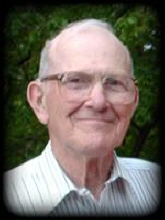 Wayne O. (Bud) Frazer passed away on Friday, May 20th at Van Diest Medical Center in Webster City, Iowa.  The family will receive friends and relatives from 5:30 to 7:30 PM on Monday, May 23rd at Asbury United Methodist Church in Webster City.  A Funeral Service will be held at the church on Tuesday, May 24th at 1:00 PM.  Burial will be at the Graceland Cemetery in Webster City.  The family has chosen Boman Funeral Home (www.bomanfh.com) to care for their needs.

Bud was born in Prairie City, Iowa on July 21, 1926, to Vern and Mabel Frazer.  He was the middle of the five children in the family, who all grew up on the family farm.  This agricultural heritage provided the bedrock for the values, integrity and work ethic that defined much of his life.  While growing up he was active in 4H, and won many awards at both the County Fair and the Iowa State Fair for cattle he raised, including Grand Champion.  He attended Country School for his first 9 years of formal schooling.  When the time came to attend High School in town, Bud was selected by the parents in his area to be responsible for transporting the other area children to school.  So at age 13, he was provided a $35 1929 Model A 2 door and began a lifetime of driving a favorite pastime.

Bud was drafted into the Army in 1944 at age 18 and served nearly two years in Europe, first as a Tank Destroyer driver, then after VE day as a supply truck driver.  He drove in and through many prisoner of war camps and drove over 40,000 miles during his time in Europe.  His service to his country was a source of much pride for him.
Upon his return to civilian life, Bud went through the two-year business program at AIB in Des Moines and began work as an insurance adjuster.  He also met the love of his life, Beverly Harrison while in Des Moines, and they were married in Redfield, Iowa on Easter Sunday, March 28, 1948.  That union of 68 years resulted in four children, Gary Frazer (Sandra), Connie Frazer (Brad Johnson), Michele Feldman (Richard), and Melody Sharp (Alton). Grandchildren Kevin Frazer (Jessica), Eric Frazer, Ryan Frazer, Jenny (Ben) Schipull, Joel Feldman, Jake Feldman, and great-grandchild Owen Frazer.

Bud began work in the consumer finance industry in 1954, which eventually resulted in his founding of Frazer Finance Company in Webster City, Iowa in 1962.  He was an active leader in Iowa’s consumer finance industry, including serving on the board of the Iowa Small Loan Association and later on the Iowa Consumer and Industrial Loan Association, eventually serving as its President which he considered a great honor.  After selling his finance company in 1996 he began a second career as an environmental compliance consultant, before fully retiring.

Community was an important aspect of Bud’s life, and he gave freely of himself and his time to multiple community organizations.  He served over 20 years on the Fuller Hall Board of Trustees, many years on the Kendall Young Library Board, and four terms on the City Zoning Board of Adjustment, including two years as its Chairman.  He was a long-term member of Kiwanis, serving both as the President of the local club and as a district lieutenant governor.  He was also a member of the American Legion and the local Masonic Lodge.

His faith was integral to his life, and he has been an active member of Asbury United Methodist Church for over 60 years.  He served on the Board of Trustees for two terms as its Treasurer, and was on the Finance Committee for twelve years, and served as its Chairman.  In later years he has been active in smaller groups including Man to Man.  He constantly demonstrated his faith by the simple application of the Golden Rule; he was known for his willingness to go out of the way to assist anyone in need.  No was not a word in his vocabulary.

Bud was preceded in death by his parents and three of his siblings, his daughter Melody Sharp, son-in-law Richard Feldman, and grandson Eric Frazer.  The family suggests that memorial contributions may be given to The Lupus Foundation of America, Kendall Young Library or Asbury United Methodist Church.
To send flowers to the family in memory of Wayne O. (Bud) Frazer, please visit our flower store.