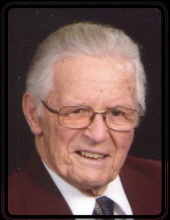 Bill was born on a farm near Livermore, Iowa on December 4, 1926, to Leo and Beatrice (Cox) Biggins. He attended country school through the 6th grade, then moved to Emmetsburg, Iowa in 1940. He attended St. Ellens School from 7th grade through 12th grade.

After graduation, he farmed with his father until he was drafted into the army in 1951. He served during the Korean War from 1951-1953. When he returned from the service and moved to Ft. Dodge, Iowa, he was employed with S&M Finance Co. as a District Manager in Webster City for 21 years. After selling insurance for the Knights of Columbus for 1 ½ years, Bill ran the consumer loan department at Webster City Federal Savings and Loan Bank from 1983 until his retirement in 2003.


Bill and his wife, Jean (Witham), were married at St. Matthew’s Church in Clare, Iowa on January 29, 1955. Their marriage was blessed with four children: Stephen (Jan) Biggins, Jeanine (Mike) Moberly, Kathleen (Doc) Rozinek, and Cheryl (Lance) Miller; nine grandchildren; and one great-grandchild. He is survived by one sister, Dorothy Grace of Emmetsburg, Iowa. He was preceded in death by siblings: Dolores Riggs, Gertrude Carney, Robert Biggins and Jerry Biggins.

He was a member of several organizations, including Knights of Columbus (over 50 years), Kiwanis Clubs (over 50 years), American Legion, Antique Tractor Club, and was a prayer partner for St. Thomas school children.

In lieu of flowers, memorials may be designated to St. Thomas Aquinas School.
To send flowers to the family in memory of William "Bill" Biggins, please visit our flower store.