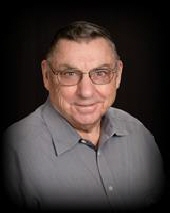 William E. Breitenkamp, Jr. died on  Friday, May 13, 2016, at  Promise Hospital in Mesa, Arizona.  The family will receive friends and relatives on Thursday, May 19, 2016, at Boman Funeral Home from 5 – 7 PM.  Funeral Service will be held on Friday, May 20, at St Pauls Lutheran Church in Webster City at 1:30 PM.  Burial will be at the Graceland Cemetery in Webster City.  The family has entrusted Boman Funeral Home (www.bomanfh.com) to care for their needs.

Bill was born on April 27, 1937, to William Peter and Minnie Pauline (Seiler) Breitenkamp, Sr. in Webster City, Iowa.  He graduated from the Blairsburg High School in 1955.  Bill started working full-time right out of high school on the family diversified farm and continued farming until his retirement in 1996.  He met Inez Rose McMahon roller skating, and the couple was married on August 31, 1958 at St. Pauls Lutheran Church in Webster City.  They raised three children together and continued to enjoy roller skating as a family.  Inez passed away in 2003.  On July 7, 2007 Bill married Beverly Vinson in Des Moines Iowa.


Bill enjoyed making things from wood.  He made many beautiful pieces, including chests for each of his granddaughters.  He enjoyed playing games, cards, traveling and camping.  He was a member of St. Paul’s Lutheran Church, Webster City, Iowa, where he served as trustee, and an associate member of Sonland Lutheran Church, Casa Grande, Arizona, where he served as vice president of the congregation and was a past trustee.